How to tell if your goat is going to kid

This excerpt from Goat Health Care that tells you when your goat is going to kid:

How do you know what to look for? The first thing is a softening of the tail ligaments. This is 100% effective, in my experience. If you check the doe long before she reaches this stage, you will know what you are feeling. I have been mistaken though, even recently, in a doe with very widely spaced ligaments.

Visualize a V on top of the goat’s rump stretching to the tail, with the point at the tail. These are the tail ligaments, and when they go completely mushy the doe will kid within 24 and, often, within 12 hours. This is the best sign that she is entering the first stage of labor. You can sometimes tell that this has occurred if the goat seems to have lost her ability to hold the tail up. (You can find a diagram of the ligaments at the Fiasco Farm site, as well as lots of other helpful kidding information.)

Also look at the udder. The udder will begin to develop and fill. In some does this will begin to occur months in advance, in others it happens in the last 3-4 weeks, and in other cases not until right before kidding. Checking regularly toward the end of pregnancy is helpful, if the doe is agreeable. Otherwise, just look at it closely for changes; it often become taut and shiny.

You may also begin to see some discharge and the shape of the doe’s body may change as the babies begin to move into position for birth. Watch for behavior changes, such as pawing at the ground, loss of appetite, more talking, personality changes (e.g., the goat doesn’t want you to leave), changing position frequently and looking uncomfortable, licking herself, breathing more heavily or grinding teeth.

Although some goats will isolate themselves, I have often observed fighting with other does, and actually had to separate the mother for safety. Each doe is different and may show different signs that she is going to kid soon.

According to David MacKenzie, in Goat Husbandry, as long as your can see the kid(s) as a bulge on the right side and see movement, the goat is unlikely to kid within the next 12 hours. I have not tried this method.
Posted by karmadillo at 9:49 AM 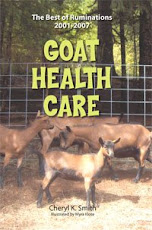 karmadillo
Low Pass, Oregon, United States
I have been raising goats since 1998. I have written two books: Goat Health Care (www.goathealthcare.com) (2009) and Raising Goats for Dummies (2010). My goal is to help goat owners learn about how to keep their goats healthy.